Reducing Radiation Exposure One Image at a Time

Reducing radiation exposure from computerized tomography (CT) scans has become one of the primary goals of Mayo Clinic's CT Clinical Innovation Center. At a time when CT scans are being used with greater frequency, the work of Cynthia H. McCollough, Ph.D., and her research colleagues has cut the risk of exposure without sacrificing image quality or diagnostic capability. 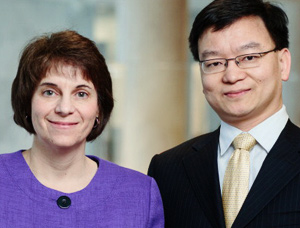 
X-rays have been a medical tool for more than a century. The exquisite details of CT scans have offered unique views of the inside of the body for more than a generation. They're vital in helping doctors diagnose a wide range of conditions, plan treatment, monitor progress and guide procedures.


However, recent reports in scientific literature and the public media have raised questions about the use of CT scans because they increase a patient's exposure to radiation, which, in high doses, is associated with an increase in cancer risk.


Although the average amount of radiation exposure from a single CT scan is a fraction of the radiation a person receives from nature in a year, Mayo Clinic has been committed to reducing unnecessary exposure and minimizing the risks without sacrificing the image quality.


"At high doses of radiation — much higher than the levels used in a medical imaging exam — the data clearly demonstrate an increased risk of cancer," says Cynthia H. McCollough, Ph.D., a medical physicist at Mayo Clinic in Rochester, Minn., who directs the CT Clinical Innovation Center and who is an internationally recognized expert on radiation exposure and risk.


"Medical imaging operates well below those levels," she says. "It's analogous to taking an aspirin. Taking a whole bottle all at once is risky, but taking two pills isn't. Still, if only one pill will get rid of my headache, I'll use just one. The radiation exposure from a CT scan isn't dangerous, but if we can use an even lower amount, without compromising the exam, that's what we'll do."


In addition to educating patients and physicians about the low risks of a CT exam, Dr. McCollough and the CT Clinical Innovation Center focus on maximizing the benefit-to-risk ratio.


She is continually looking for ways to reduce radiation exposure while maintaining the needed image quality. A crucial step in that process includes better defining what level of image quality is needed.


"We don't always need pretty pictures," Dr. McCollough says. "We only need pictures that clearly show the disease or injury. For some conditions, a really low exposure of radiation can be used."


Some people still worry, however, that a number of small doses will add up so much that the medical benefits no longer outweigh the cancer risk.


Dr. McCollough emphasizes that this is not the case, even for patients who receive several imaging exams throughout the course of their lives, or even over the course of one illness or injury.


"We know that the body can repair damage to cells from radiation," she says. "Our bodies do this all the time, since there is naturally occurring radiation all around us. In radiation therapy, for example, the treatment dose is delivered over many days so that the healthy tissue has time to repair itself between treatments. The risk from a small dose of radiation is always low, even if a patient has had many past exams."


Bridge between research and clinic 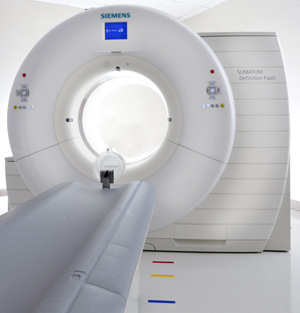 The Somatom scanner at Mayo Clinic.

A comparison of images of a patient's CT scan from one year to the next shows a 60 percent reduction in radiation used for the same single image.


One way Mayo Clinic has worked to reduce radiation exposure has been to create a bridge between the scientists who do the research and the doctors who deliver patient care. The CT Clinical Innovation Center is a hybrid of basic research and clinical care.


"We're located right in the middle of a clinical practice," Dr. McCollough says. "So in the morning, if a technologist is scanning a patient and they're not sure about something or see something interesting, they literally just open a door and there are five medical physicists around to talk to. We've created a bridge between the nerdy scientists and the actual delivery of care."


To reduce the amount of radiation patients are exposed to, the CT Clinical Innovation Center takes several routes.


"The most basic, low-tech thing we can do is to 'right-size' the dose," Dr. McCollough says.


Mayo Clinic has developed a computerized set of electronic protocols, or standards. If an adjustment is made to a protocol, the correct, new information is instantly available at all 25 CT scanners on the Mayo Clinic campus in Rochester, Minn., as well as at the Mayo campuses in Florida and Arizona, and all Mayo Clinic Health System sites.


A protocol review team ensures that the scanning instructions are kept up to date. And much like the automatic exposure feature on a camera, CT scanners can now automatically adjust the radiation exposure that a patient receives based on the type of exam and the size of the patient.


Mayo Clinic has had a business collaboration with Siemens Healthcare, one of the major CT scanner manufacturers, to develop and refine this technology during the past decade.


One of Dr. McCollough's medical physicist colleagues at Mayo Clinic in Rochester, Lifeng Yu, Ph.D., developed an algorithm that automatically selects the best X-ray energy for a given exam and patient. This is different from just adjusting the exposure level.


"X-rays come in different energies, and it is more dose efficient to use lower energies in children and smaller patients," Dr. McCollough says. "In the smallest patients, it drops the dose 40 to 50 percent."


"Everything we're doing with dose reduction is to make sure patients get the exams they need at the lowest radiation doses," Dr. McCollough says.


A specific specialty where use of medical radiation has increased dramatically is in cardiology. Charanjit S. Rihal, M.D., a cardiologist at Mayo Clinic in Rochester, Minn., recently published the results of a quality-improvement project in the area of catheterization.


"The improvement consisted of three very simple but very effective things," Dr. Rihal says. First, technologists adjusted the number of pulses of X-ray per second that the CT scanner delivers, also called the frame rate. They cut the frame rate from 30 pulses per second to 7.5 pulses per second. Second, they turned down the actual dose of radiation that the machine emits. Finally, they developed a culture of radiation safety.


"We launched educational programs for our trainees and staff on the basics of radiation physics and radiation safety," Dr. Rihal says. Trainees also now have to pass an exam about radiation safety.


As part of the culture of safety, the amount of radiation that a patient has received is now reported right on the official catheterization report, further encouraging staff to use as little radiation as possible.


The results of the changes have been encouraging.

"We reduced the amount of radiation by at least 40 percent, and in some cases by as much as 70 percent," Dr. Rihal says. He adds that if technologists need a higher dose of radiation to gain more image clarity, "It's easy just to twist the dials on the machine and crank it up for a few seconds. There's no need to routinely use the higher dose." 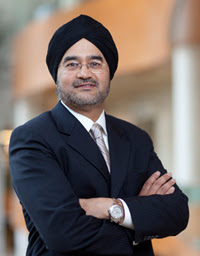 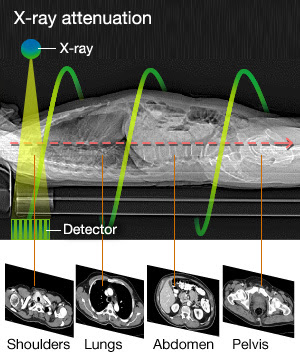 
For example, working with uroradiologist Akira Kawashima, M.D., Ph.D., at Mayo Clinic in Rochester, scientists from the center developed a low-dose protocol for people who have experienced pain with prior kidney stones.


A CT scan is the standard method to diagnose kidney stones, but people who have recurrent stones may be concerned about the radiation from multiple scans. Drs. McCollough and Kawashima worked together to turn down the dose while making sure the image quality is high enough to catch any potential stone.


"It worked so well that we realized we weren't missing any stones, so that is the new protocol," Dr. McCollough says.


In another example, Joel G. Fletcher, M.D., a radiologist and the medical director of the Mayo Clinic CT Clinical Innovation Center in Minnesota, worked with pediatric oncologists to lower the radiation dose for follow-up CT scans for children diagnosed with cancer who had completed treatment.


"We just kept turning down the dose until finally it was down to the lowest setting the scanner would run at," Dr. McCollough says. With each setting, a pediatric radiologist would look at the scan to ensure that the image was still clear. "We try to do the limbo: You know, 'How low can you go?' "

With education, new technology and collaboration among physicists, radiologists and other physicians, Mayo Clinic is answering that question.
Posted by Unknown at 1:56 PM